Hay fever affects roughly one in four people in the UK, and although there is no definitive cure, there are a number of precautions that can be taken to help relieve symptoms. Take a look at our tips to combat hay fever this spring/summer:

An allergic reaction occurs when your body perceives something harmless as being a threat. With hay fever, the ‘threat’ is pollen, and when a hay-fever sufferer comes into contact with pollen, their immune system thinks that it’s being attacked by a virus. That’s what causes the runny nose, the sneezing, the itchy eyes, and the tiredness, although symptoms will vary from person to person.

And while those symptoms may seem fairly trivial to non-sufferers, hay fever is something that can significantly affect everyday life. Just imagine being allergic to the WHOLE of outside!

It’s vital to make your home as pollen-free as possible, so make sure to keep your windows shut through the day – especially bedroom windows! One of the reasons why hay-fever symptoms can be worse at night is because pollen has accumulated in the bedroom through the day via an open window.

Another idea is to dry your laundry indoors if possible. Pollen can stick to clothes outside (particularly bedsheets), which is why it’s also a good idea to change into a fresh set of clothes if you’ve been outside. And this goes without saying, but make sure that there are no plants or flowers in the rooms that you’re likely to spend time in.

There is a wide range of over-the-counter hay-fever treatments available, but it’s best to first consult your doctor. Each brand of antihistamine has different active ingredients, and what works for some might not work for others. For more information, take a look at the NHS’s hay-fever treatment guidelines.

Have a look at the Met Office’s pollen forecast before heading outside. If it’s predicted to be a particularly bad day, make sure to pack extra hay-fever supplies, or you could just opt to reschedule! 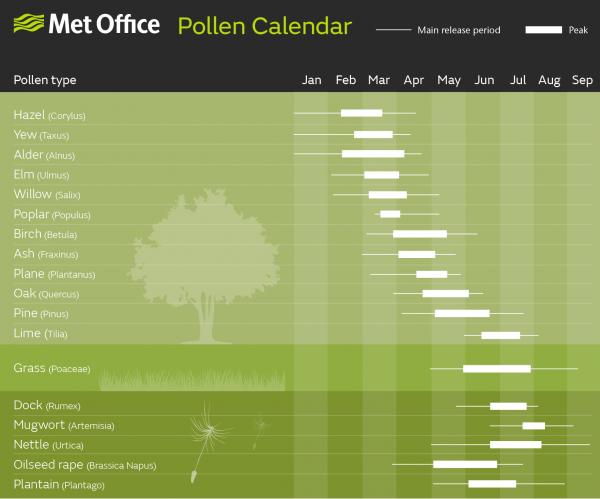 Did you know that even grass releases pollen? Most people with hay fever are allergic to grass pollen, and mowing the lawn is one of the worst triggers of hay fever symptoms. Obviously, installing artificial turf isn’t going to completely solve your hay-fever woes, but it can reduce the pollen count in your garden and make outdoor activities less of a stress.

Have a great spring/summer!